I do love the New York Botanical Garden. After our first visit, last year, we were so impressed that we decided to become members, and now we go every few months. Yesterday's visit saw a riot of colour in the Azalea Garden, while the Littleboys delighted in picking up nature field notebooks in the Children's Garden and marking off different colours of bird. 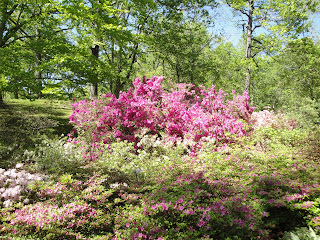 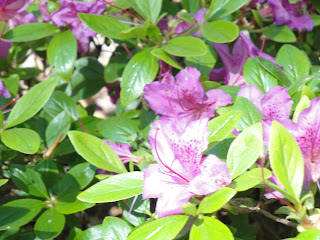 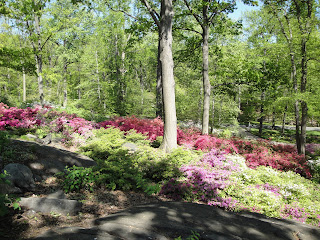 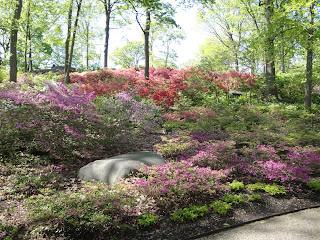 For anyone visiting New York with kids, I would definitely recommend it; they always have fabulous activities for children, themed around the time of year. You can also take a picnic, to avoid spending a fortune in the cafe, although you usually can make up for that by buying some of the gorgeous things they sell in the gift shop. One of the most fun things about it is that you're right in the middle of the Bronx, yet you're in this oasis of calm, green, beauty, with majestic old trees, birdsong and ponds. Only the distant roar of cars reminds you of the location in the heart of urban New York. Their next big event will be a recreation of 'Monet's Garden'. Can't wait.
Posted by nappy valley girl at 10:55 7 comments:

"Mummy, I think I need to spend more time at school," announced Littleboy 1 plaintively after getting off the schoolbus on his first day back. After three weeks, he was upset that he had forgotten several things about the school routine - for example, the need to put his chair up on the table when school finishes, putting his homework book in his folder and other stuff that I suppose he normally does on auto-pilot.

I felt exactly the same, I told him. Isn't it strange how, after a break, everyday things suddenly don't come automatically? Driving the car (I didn't drive in England this time as mean old rental car companies now charge per driver, but got used to other people driving on the left after the first week, when it seemed really scary); how my cooker works; the computer system I have to access for work.The first time you do these things again, your brain doesn't quite recall the process. Of course, after the first day, it all comes flooding back, but it's amazing how many things we do are just ingrained.

I've also found it very hard to shrug off the jet lag this time. I wake up early, then am ready to sleep by 9pm, and spend most of the day feeling sluggish and in dire need of caffeine. It hasn't helped that Littleboy 1 suddenly seems to have developed a fear of the dark, and keeps coming into our bed in the early hours because he's 'scared'. (This follows his over the top reaction to the CBBC show Horrible Histories, which terrified him so much in England that he wouldn't go to bed on his own for two nights. Friends tell me it's a good programme, and I'm still not sure what exactly scared him so much, but it seems to have been the catalyst. Littleboy 2, meanwhile, watched the same thing and was completely unaffected - he'll probably be a horror film enthusiast when he grows up).

It's good, though, to go away for three weeks. It makes you appreciate where you live afresh, and take comfort in your daily routine, even if you were getting bored of it before. I remember coming back to London after a four month backpacking trip in 2004, and just being delighted that I could walk around without having to fear someone might be trying to con me or nick my wallet (we had had a few experiences in South America). It's absolutely beautiful here at the moment, all the trees suddenly in leaf and the grass suddenly bright green and lush. Azaleas and cherry blossom are flowering, and joggers seem to have emerged from their winter hibernation to pound the streets. And it's a relief to be back in our own house, despite the kindness of family and friends in putting us up, because staying with other people when you have kids is always more tiring than being at home. Both boys seem so pleased to be back at school, seeing their friends and teachers again (whereas before we left, they were ecstatic at the thought of no school for three weeks). It's a cliche I know, but a change really is as good as a rest.
Posted by nappy valley girl at 09:20 8 comments:

State of the Nation

We're back! We survived economy on Virgin Atlantic (of which more later) and finally touched down in the good old US of A last night. And, although I had my laptop with me, I decided not to update the blog until now. Partly because we were so busy - racing around the country trying to pack in as many friends and relatives as humanly possible in three weeks - but partly because I wanted to get the UK in perspective, put it behind me so to speak, before I pronounced on the State of the Nation.

First of all, London. Now, we are supposedly in a recession (or just coming out of one, depending on who you listen to). But never have I seen London look so prosperous, or its infrastructure so functional. So many additional new Tube lines! The gleaming rows of Boris Bikes! The spruced up stations; it all looks a lot more shiny and new since I was last there.

Then there are all the new buildings - the Shard! (yes, it definitely does change the skyline, in quite a dramatic way). But not just the Shard - the 'Cheese Grater', and other massive skyscrapers that seem to be popping up along the South Bank. The amount of construction work going on is just astounding. Meanwhile, a quick trip to Soho revealed many new, high end looking bars and restaurants - clearly someone is still spending money.

I'm sure much of this is due to the Olympics, for which we saw much preparation. In Greenwich, where we were staying, the park was being prepared for the horse-riding events, and we also took a trip to look at the Olympic Park in Stratford. (Thank you again, Nota Bene, for the John Lewis viewing platform tip - it was handy to have somewhere to view the park in the pouring rain). It's all very impressive, as is Westfield Stratford, which has succeeded in making Newham a destination (a thing my husband, who worked at Newham General as a junior doctor for six months, says he never thought he'd see). Yet the general view of London friends we met (Nota Bene excepted) about the Olympics was negative, or at least 'meh'. People were moaning about how they'd get to work in the crowds; they thought the Olympic park would be a white elephant afterwards. I wonder if this will change as the Games get closer? Personally I think it's all rather great, and can't wait to see London host the Games, albeit on TV.

This was a definite reminder of the difference in attitude between Brits and Americans - can you imagine Americans being negative about having a world-famous event in their home city? No, their enthusiasm would be boiling over. But Brits, particularly Londoners, love to have a moan, as I remembered each time I picked up a copy of the now free Evening Standard on the train. (That's another thing that's changed. And weirdly, there now seem to be loads of free papers left over, even at 10 in the morning - a far cry from the days when I was commuting from Clapham and you were lucky to get a copy of Metro after 8.30. I wonder if we now have free paper overload? Mind you, Littleboy 1 thought it was wonderful that newspapers were free and insisted on carrying around his copy all day. He took great delight in showing off his recently acquired reading skills to an entire train carriage as he solemnly read out a story about the FA Cup, and couldn't believe that I was going to leave my copy on the train.)

The Littleboys remembered nothing about London, I'm sorry to say. Not the playgrounds where they once played, the pool at their grandfather's house they visited regularly, or indeed our old house, which we visited briefly. The only time Littleboy 1 appeared to remember something was on the rather grotty walk between Clapham North and our house, when he saw a sort of weird brick platform between a tower block and a doctor's surgery, which he would sometimes scale as a small child. "I know this place!" he exclaimed. It was about the least glamorous place in our entire visit - I don't know what that says. Littleboy 2, meanwhile, missed his challah bread after a fruitless search in Sainsbury's, but both of them discovered 'Coco Shreddies' (which I'm cross about, as this was only because it was advertised on the back of a normal Shreddie box. How are you supposed to keep your kids' breakfast healthy when there's all this enticement to eat chocolate versions of the stuff they like perfectly well? I see there is also now Chocolate Weetabix, which frankly horrifies me. I thought we Brits did better than Americans when it came to kids' diets, but now I'm not so sure).

We managed to notch up an impressive array of relatives for them to visit (at the last count, this includes four great aunts and great uncles, two grandfathers, two aunts, one Uncle, four cousins, four second cousins and several cousins once removed). We also foisted them on several sets of friends' children and expected them to get on with it. It seems that despite their American-ness, they could still bond easily with British kids over football, iPad games and generally running around the house causing mayhem.

Meanwhile, we managed to catch up with about as many friends as we could pack into three weeks, including throwing a party for 40 people. I revelled in being able to have good British conversations with my friends, without having to subtly tweak my language to be understood, and go easy on the irony. Perhaps the most serendipitious meeting of all when we happened to be in Westfield Stratford at the same time as my old mate Four Down Mum to Go, who I thought we'd miss as she was busily preparing for the London Marathon. And, for those of you that are interested, the visa renewal stuff was completely painless this time - for some reason we got fast tracked, were out of there in just over an hour, and even had time for a nice pub lunch in Chelsea before we had to collect the boys from my father, who kindly looked after them.

The British weather was, well, typically British, with lots of showers and a tiny bit of sunshine. That hasn't changed. But London; well, it's evolved quite a lot in three years. It's looking good, and while it will be a wrench to leave Long Island next year, maybe, just maybe, returning to the UK might just be OK.