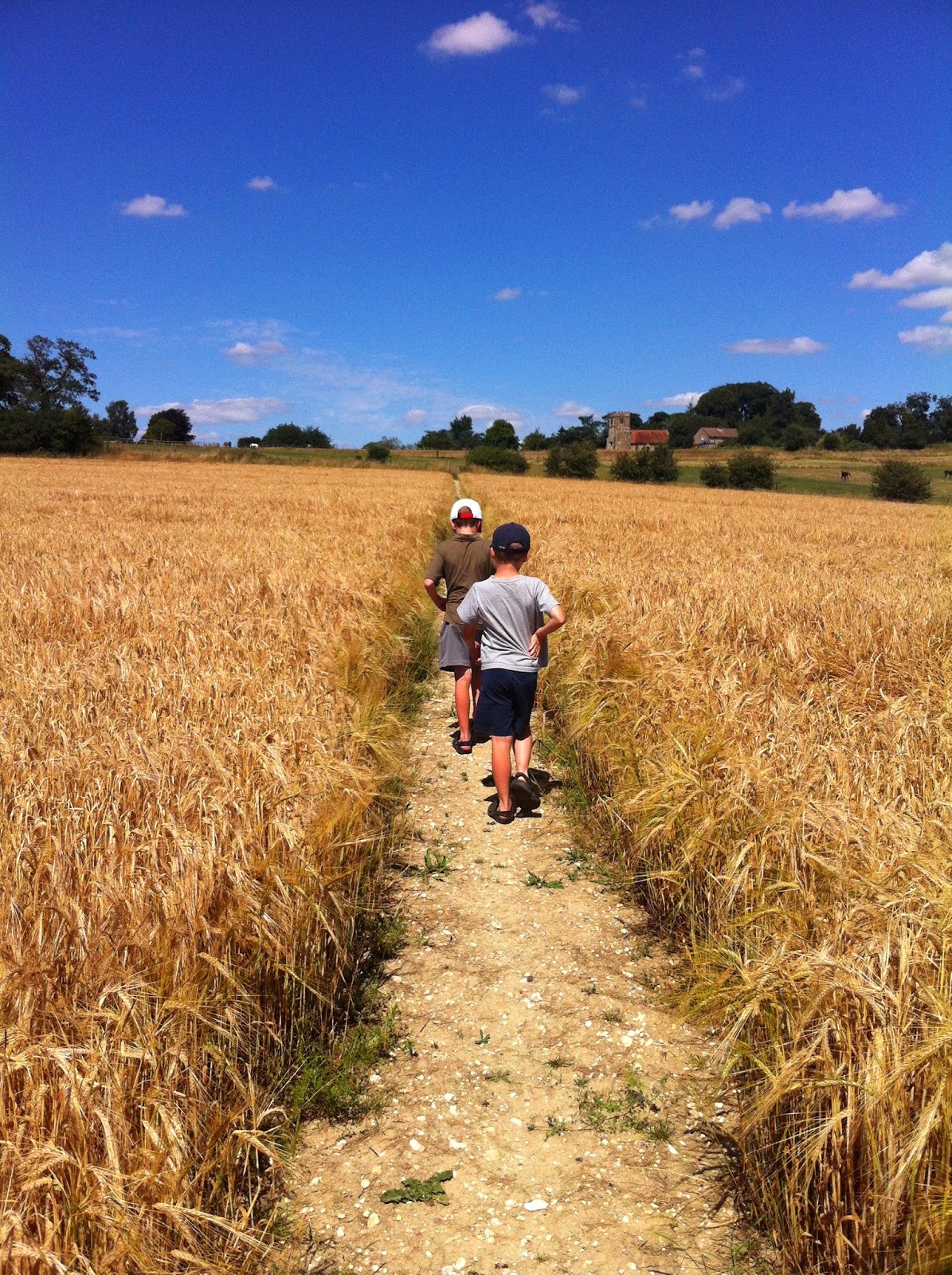 A few months after I first met The Doctor, he decided to take me home for the weekend and introduce me to his parents. (This, according to our mutual friend Fred, was a Big Deal. I guess he was right. The friendship lasted as well as the romance; we, and kids, holidayed with he, and family, in Spain last month).


We took the train, not to their London house, but to their cottage in the country, high up on the Berkshire Downs. It was a beautiful sunny May day, and as we ate a delicious Sunday lunch on the lawn, I remember thinking what a gorgeous place it was, with its views of cornfields, copses and the far off Ridgeway.

Fast forward twenty years, and I'm spending this week alone with the boys in the very same cottage, with The Doctor back working in London. Thanks to my in-laws it's always been a "weekend home" for us -- a real luxury to have. But it's more than that - it's been a constant family home in a time of flux and change. Over the years this ancient cottage has witnessed countless family gatherings, parties, engagements, funerals, memorial services, family rows and family celebrations.

Beautiful in autumn and spring, the village can be bleak in winter, but this summer it has really come into its own. For the last few days the sun has shone ceaselessly, and the sky is azure. There's always a brisk wind up here, but at the moment it's a cooling breeze when it does come, and it's remarkably still the rest of the time. Butterflies flit around the wildflowers in the garden, a distant church bell rings occasionally, and everywhere there is the smell of green things growing.

I work in the mornings, taking breaks to wander round the garden with a cup of tea. The boys play - either outside on the trampoline or climbing trees, or in the playroom which is so far away I can't hear them. In the afternoons, we walk to the local farm shop, or play pat-ball tennis on the terrace, or take a dip in a pool belonging to some very generous neighbours. It's all very laid back.

Today I decided to take them on a different walk, to an abandoned barn about half a mile away. It was rather overgrown with nettles, which prompted quite a lot of grumbling (they're not that much country boys yet) but on the way back we found a crop of early blackberries in the hedgerow, which made it all better. It's simple entertainment, but we appreciate it all the more for it being different from our life in the city. These American/London boys are still learning how to identify flowers and plants - ferns, thistles, elderberries and other things that country dwellers take for granted. (They know stinging nettles though -- and hate them even more than we hated poison ivy in the US).

I've always said I didn't think I could live in the countryside permanently. I'm a town mouse, and I like my creature comforts -- shops, theatres, people. But this week I'm starting to change my mind. I'm sure it's partly the sunny weather, and that I wouldn't be saying the same if I was sitting up here in February, the wind howling through the brick walls.

But just at this minute, with the wood pigeons cooing in the trees and the corn glowing golden in the field beyond my window, I can feel the pull of country life. One day the cottage will be ours (jointly), and I hope that we never take it for granted.
Posted by nappy valley girl at 11:32 3 comments:

What shall we name the blog?

The move uphill to Crystal Palace is looming ever nearer and I'm still mulling over blog names.

A few of you have suggested names that somehow link it back to the Nappy Valley moniker that is my "brand", my "trademark" and my "USP" (as I'm sure the blogging gurus at BritMums would tell me). Iota suggested "From Nappy Valley to Crystal Palais"? or "From the Valley to the Palais" and Melissa thought that "Crystal Palace - the new Nappy Valley" might also helpfully raise house prices in my area (I like her thinking -- although given the current London house bubble and pesky estate agents inflating prices, I don't reckon much help is needed).

Bearing this in mind, I wondered about "Ally at the Palais (Moving on from Nappy Valley)" as my name could possibly be shortened to Ally. But is this a bit of a mouthful I wonder? And would people get confused with Ally Pally (which is the other side of London)?

Then again I could go down the Crystal route. Crystal Clear? Crystal Balls? (I quite like the latter but I'm concerned I might get rather a lot of strange hits on my blog).

Or there's the Transmitter (as Iota also suggested). Crystal Clear Tranmission? It sounds a bit like an ad for a TV though.

Other thoughts: Life at the Palace? Palatial Living? House on the Hill? Parklife (we're very close to Crystal Palace Park)?

Tell me what you like, and if you really think I should keep the "Nappy Valley" element....
Posted by nappy valley girl at 04:47 7 comments:

The last time I visited the Costa Brava, I was 18, and armed with an Inter-Rail ticket. This was a bit of a problem, as most of the beach resorts there weren't actually served by rail - but my friend and Inter-railing companion, J, wasn't fazed by that.

She wanted to go to the beaches where she'd camped with her family -- so, with our massive backpacks and her huge stereo, we took a succession of local buses from Girona and spent several nights in tiny "pensiones" close to the sea. We sunbathed, drank cheap sangria and ate paella, sat out late at night on the beaches getting chatted up by local boys, dragged our backpacks round the Dali Museum at Figueres and finally washed up in Barcelona, whereupon we almost got mugged and spent the entire day in a police station.

This time was a bit different. The Doctor and I arrived en famille with a car, two children, two suitcases, a large coolbox and various other items (including Littleboy 2's school uniform, having come straight from his end of term service). We arrived at a villa near Begur on the Costa Brava at the not-too-appalling hour of 7pm after a marathon day and a half's drive. Luckily our friends, with whom we were sharing the villa, had arrived first and had everything sorted - drinks, dinner and even inflatables for the pool.

Begur is a beguiling town (of which more later) and surrounded by some stunningly pretty little coves. Little being the operative word - don't go here if you want wide, sandy beaches where you can spread yourself out. The beaches are rocky, nestled at the foot of cliffs and accessed by winding roads - so parking is limited and you need to get there early to find a space. I dread to think what it's like in high season, as we were not even there within Spanish school holidays. Our first day, at Tamariu Beach, was a Saturday, and when we arrived at the beach there was barely room to lay down our beach towels. (Luckily having five rather lively kids who wanted to play beach ball helped -- after a few hours, all the neighbouring sunbathers had mysteriously moved away).

But the sun was warm, the water was clear and - best of all - there was a diving board on the rocks, allowing hours of endless fun for the children (and me) diving into the aquamarine sea. There was also surprisingly good snorkelling (or in our case, diving in goggles) -- I never think of the Med as a snorkelling or diving destination but we saw tons of fish when we dipped below the surface.


Aiguablava -- another of Begur's local beaches -- was an even prettier cove, lined by a seafood restaurants and with pedalos and kayaks for rent. The pedalos were the kind that have slides coming off them, so of course the children were desperate to go on one.

Begur itself is a pretty medieval hill town with a castle on its peak and crumbling towers from which the townsfolk used to watch for pirates. It has apparently become quite a destination for chic Barcelonians, and you could tell that from its range of boutiquey-type hotels, trendy bars and cool-looking restaurants that were more like something you'd expect in Manhattan than the Costa Brava. However, with five kids in tow, including a toddler, this wasn't for our party, and happily we found the kind of places that did a good pizza/ice cream option as well as some tasty tapas.

The nearby village of Pals was also a real find -- another medieval town with ancient walls and beautiful gothic architecture. We headed there on a rainy day and found it packed by fellow tourists flooding the souvenir shops - which, rather than selling cheap tat, were rather high quality, many selling the glazed artisanal pottery which is the local industry.

All in all the area was unexpectedly unlike the Costa Brava I remembered from years before -- and definitely unlike the much brasher Spanish Costas of Southern Spain, with their British fish and chip cafes, high rise blocks and sunburned clientele.

Lastly-- don't I always say this?-- you can drive there from the UK. It's only an hour from the French border and it's totally do-able, even with children. Harry Potter and the Goblet of Fire helped, and we had stop -offs in Cahors, in southwest France, and Blois in the Loire Valley on the way back. Even on the way down, where we could only stop one night, we managed dinner in the city of Chartres, right by the famous and very beautiful cathedral.

And, although we did spend many hours in the car, there was only a BIT of moaning about the drive. Although the cheers that the boys let out as our Channel Tunnel train pulled into Folkestone were rather revealing....