I didn't get Thanksgiving at all when we first moved to the US. It seemed a kind of inconvenient holiday, jammed in at the end of November when I hadn't started feeling at all festive and everyone was full swing in the middle of work and (at that time) preschool.

I remember all too well the first year we were in New York. It seemed as if everyone I knew was going off to celebrate with their families and was incredibly excited, and for us, nothing was happening. We were saved at the last minute by our lovely German expat friends, who invited us round for a turkey and all the trimmings (plus some Germanic additions such as dumplings). It was actually rather wonderful.

From then on, celebrating Thanksgiving with our friends became a tradition for us.  We had them back the following year, and then went to their house again. We became more familiar with the rituals of the day; watching the Macy's Manhattan Thanksgiving parade on TV in the morning, going for a walk after lunch in the usually glorious autumn weather. In 2011, I ran the annual town "Turkey Trot" before lunch, and appreciated the slap-up meal afterwards all the more.

So this year it seems a bit strange not to be celebrating the last Thursday in November. Not only seeing my friends' photos of their own celebrations on Facebook, I also feel left out as my work colleagues (all in the US) are on holiday and our offices are closed. While they are all being thankful, we're here in drizzly London on an ordinary Thursday, with everyone at school and work.

You see, I came around to Thanksgiving after all. It's an excuse for a big meal, a party and a festive feeling at a cold time of year when there's not much going on. (Many Americans I know say they even prefer it to Christmas, as there's no pressure to buy presents.)

Never mind. One thing I will appreciate this year is Christmas in England - my first since 2008. Mince pies, proper English carol services, mulled wine, Christmas pudding - it's all to come, and I intend to make the most of it. It's not been the easiest of years, but for that, I'll be thankful.

In the meantime, happy Thanksgiving!

Littleboy 2 is getting far too clever for his own good.

I don't just mean academically, although it's true he's currently on a roll at school. He keeps coming home from school with certificates for good work, stickers from the head teacher and so forth (though is mysteriously reticent on what these were actually awarded for).

And whereas his brother is definitely the mathematician in the family, I think he may have inherited my own preference for the written word. He's recently begun a diary, and is keen to write everything down. Meanwhile a future literary critic may be emerging: he rather startled us at the weekend by pointing out, while watching Lord of The Rings, that Sauron's eye is the symbol of evil whereas the tree of Gondor is the symbol of good. Deep thoughts for a six year old.

Yesterday's spelling homework was words with apostrophes: you'll, they're, we're, I'm etc. There was a little confusion at first, so I got him to write some sentences using the various words. When we got to You're, I helpfully jumped into explain the difference between Your and You're, and suggested he write a sentence containing both. He looked at me slyly and trotted out the following:

"You're silly, Mummy, for leaving your brand new umbrella on the bus."

I had hoped the children had forgotten the little episode, which occurred a few weeks ago in Brixton. It was raining heavily, and my umbrella had broken. About to board a bus home with the boys, I was concerned that we would be soaked on the short walk between bus stop and home at the other end, so I made the children come with me to a crowded, chaotic Poundland to buy a cheap umbrella. Of course I promptly left it on the bus - so my one pound brolly was used for all of 30 seconds. Naturally, I made the boys promise not to tell Daddy that Mummy had been so stupid.

Anyway - I couldn't argue with the sentence. It's both factually and grammatically correct. But I'm going to have to watch out with this one.

Homework, grammar and toys in pyjamas

My friend Circles in the Sand has written a lovely post about doing grammar with her boys, which inspired me to ruminate on our own homework and grammar experiences.

I've come to notice recently that I really enjoy helping the kids with their English homework.  This isn't really a surprise; I loved doing English at school myself, and always felt that an English lesson wasn't really "work", it was enjoyable. The best English lessons were those when you just got to read your book - hell, that wasn't work at all! This was closely followed by reading plays out loud, or - even better - getting to watch the video version of your set text. (Actually, I think everyone loved that. Particularly Far From The Madding Crowd with Terence Stamp and Alan Bates).

Maths was another matter. Littleboy 1 told me this morning: "Today is a great day because I have double maths." I had to laugh; my worst days at school were double maths days - clearly he takes after his father, who took Maths A Level.

Yesterday I spent ages helping him come up with creative adverbs to put in a story about aliens. It's difficult though - how much help do you give them? I don't want to put words in his mouth but on the other hand, I had to give him some clues, including hinting that "nicely" was not the most creative adverb in the world (and adding that teachers don't tend to like the word "nice" in general).

Anyway, as regards grammar: Littleboy 2 had a note come home from school which said:

"Friday is Children In Need day. Children are asked to bring into school their favourite doll, teddy or cuddly toy dressed in pyjamas or fancy dress for the day."

I'm not sure whether the sentence is actually ungrammatical, or just poorly worded, but it definitely wasn't clear.  We had a huge debate on whether it was the children or the toys that were supposed to come in fancy dress. I reasoned that it couldn't be the children, because they have sports on a Friday and it wouldn't be suitable to come in wearing PJs on a sports day. On the other hand, what cuddly toy has pyjamas?

Turns out it is the toy though. Seeing as Littleboy 2's is a tiger, he (the tiger) won't be going in pyjamas.


Lego's latest ad (above) is a sure winner for the Christmas season - it's all about father and son bonding, and features the cutest wide eyed little boy building Lego towers with his devoted Dad. It's a clever bit of marketing but I think Lego may have missed a trick. Why isn't it a Mother in the ad?

Yes, Dads sometimes get to do the fun parts of Lego building - helping put together the new Lego set they got for Christmas, for example.

But Mums, in my experience, are the ones who really know about Lego. We get to hear endless information all about the characters in Lego Chima. We have to figure out how to get two bits of Lego apart which appear to be have welded together by superglue. We have to search under the sofa for "my really important Lego guy" who's crucially gone missing five minutes before bath time. And we have to pore over instructions when it's all gone horribly wrong.

We also get to experience the joys of picking Lego up off the floor, the nagging in the supermarket when Lego minifigures are spotted at the checkout (thank you, Sainsbury's) and the sinking feeling when yet another Lego set is dimantled and goes into the big, endless pile of bricks.....

Yes, Lego, do an ad about Mothers. Because, as any Mum of little boys knows, understanding Lego is essential to raising sons.
Posted by nappy valley girl at 11:46 11 comments: 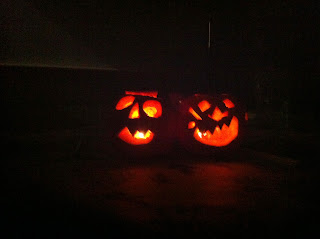 I don't know how many times I've warned the Littleboys over the past few years that Halloween in England wouldn't quite be the same as in America. I tried to let them down gently so that they wouldn't be hugely disappointed by the contrast between Long Island and London. "Halloween isn't such a big thing in England," I'd tell them. "You might not find that everyone's out trick or treating, and people don't really decorate their houses like they do in America."

But now they probably think I'm a complete nutter.


In fairness, at my previous London home, I would quite often buy a stash of Halloween sweets and end up keeping them for a whole year after nobody came round trick or treating on October 31. But it seems things have changed. Last Thursday, we headed out not only to find the streets full of trick or treating families, but many houses lit up with pumpkins. Not only that, but people were making a real effort to dress up in spooky costumes just to answer their door.

At one house, which was dark except for a lit jack o' lantern, the door appeared to open spookily by itself, before the mother (I presume) then appeared wearing a bloodstained white doctor's jacket. Her two sons then appeared at the window looking like vampires, holding candles and staring blankly out of the window without even a trace of a giggle. This was better than anything that ever happened to us in the States, where (dare I say it) the spooky element of Halloween is sometimes altogether forgotten as teams of fairies, superheroes and firefighters roam the streets.

True, the house decorations we had been missing appeared at the last minute, on 31st October, rather than being up all month, but some of them were excellent, and the pumpkin carvings in the neighbourhood were extremely impressive (compared to our amateurish efforts, above). The boys were most excited by a pumpkin carved as Mario from Mario Brothers, and there were bats, owls, and all manner of other designs.

The only contrast the boys themselves could see is that the quantity of their sweet booty was slightly less impressive than in the US. Many people had run out quite early on, including us, and some people were handing out fruit instead, as it was the only thing they had left in the house.

Next, year, I'll be dressing up to answer the door - and I'm certainly buying more sweets.