Goslings, graduation and growing up 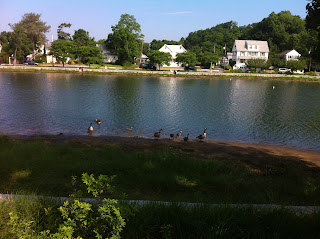 When I was a student, my parents were living in a farmhouse in Suffolk which had a large pond. Every time I went home for the holidays, my mother would regale me with tales of the ducklings on the pond; how many babies there were; how many had survived; how big they were getting; how they had grown up, and so forth. I simply could not understand this obsession with the ducks. Yes, the ducklings were cute, but did I really need to hear about them in every single letter? When I came home, I wanted to talk about friends and parties and exam results - not the ducks.

Twenty years on and I think I understand. The baby goslings that waddled up my driveway last month have now lost their fluff and are middle sized geese, following their parents around on the pond the other day. It amazes me how fast they have grown, when human children take so long to develop and change. I found myself pointing out the goslings to the boys the other day when walking past the pond, and thought of my mother and her excitement about the ducks.

I think it is only when we have our own babies that we become so in tune with the cycle of life and nature. I always find this time of year quite emotional, because it's the end of another school year, and particularly this year as we are moving on. Tomorrow is the last day of school. There have been "graduations" all week of one kind and another; kindergarten, elementary school, middle school. Children are moving up and moving on.

Today, as the kids got on the bus, I think everyone at our stop felt a little melancholy. It's not only we who are leaving; another neighbour is moving to Florida and another's son is moving on to Middle School, so won't be on the bus in September. For those that remain, there will probably be a whole new crowd. My friend confessed that she felt quite misty-eyed as she put her 10 year old on the bus for the last time; it seemed like yesterday he was in kindergarten, she said.

For us, it's the end of an era. No more yellow school bus. In September, the Littleboys will be putting on school uniform for the first time and heading off to their new schools in London. No longer small and fluffy, but still my babies.

Well, we did the diorama.

In the end it was surprisingly painless, because Littleboy 1, having moaned about it making it, suddenly decided 10 minutes into the project that he absolutely loved it and launched into it with his boundless enthusiasm. At the same time his brother, feeling left out, decided that he was going to make his own diorama - not for a school project, just because he wanted to. So they both spent a morning cutting out coloured paper and writing captions on stickers.

Thanks to those who commented on the former post for confirming that UK schools, indeed, also ask for dioramas. However, I wonder if this may be an American import (like "show and tell", "playdate" and various other kiddie terms that have crept across the pond).

"A diorama is a rite of passage for every American schoolkid," confirmed my friend K, a former teacher, who came round the other day and admired the shoeboxes and their contents. At some point, she said, every child is asked to make one, and as they get older they are required to be more and more complicated and impressive. (I'm glad Littleboy 2 got his moment, then, before we leave - he took it school and showed it to his teacher, who reportedly said "Wow!")

I must admit, I thought Littleboy 1's sea turtle diorama was pretty good.....until I was in his classroom this morning and caught sight of some other children's efforts. One had modelled animals out of plasticine, one had included real sand (why didn't I think of that?) and someone else had typed in the captions on a computer and printed them out, including the Latin name of his sea creature....oh, wait, maybe that was his Mum.

Clearly, in New York dioramas are a competitive sport.

Where I live: Indoors chez Nappyvalleygirl

A friend of mine is selling her house. For one reason and another it's been a little slow to sell, so the agent has now suggested that their house be "staged" to look better. The other day, a professional "stager" turned up with some furniture, strategically placed it in my friend's home, and put various "decorative" objects around the place (including a bowl of fake apples in the middle of a table, which made us all laugh).

They also took down my friend's own pictures and replaced them with generic, arty, black and white shots of waterfalls, flowers and the like. All very "tasteful", but somehow it annoyed me. I would much prefer that the art in a house should reflect something of the people who actually live there. My own house is not interior-designed. The pictures don't all match, and we have ornaments and photos in odd places - but it's us, and that's how I like it.

Anyway, all of that is a preamble to the latest entry in Michelloui's Where I Live series over at The American Resident. The subject this week is "Indoors".

Our house contains pictures and objects from all stages of our life, including my early years in Hong Kong. This cat is one of a pair that my parents owned; they sit on either side of our fireplace. They're a little chipped now, after several moves around the world, but they remind me of my childhood and they'll always come with me. 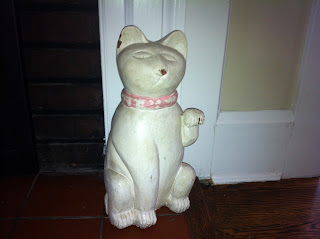 This picture is also one of a pair of Chinese embroidered artworks my parents bought in Hong Kong. The two pictures are supposed to represent sunrise and sunset, although there has always been debate over which one is which (maybe a Chinese reader can tell me what the characters say in this one?). I loved them as a child, and still do. 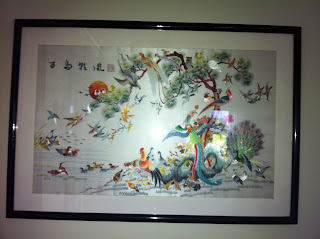 This black and white print of Siena was bought on our honeymoon in Italy; we had it framed with the purple border to match the then-purple walls of our dining room in London. 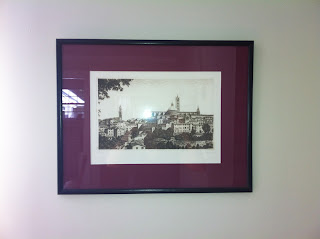 This painting hails from Cambodia; we bought it on our round the world backpacking trip in 2004, and had it sent back to the UK by courier. We think the elephant is carrying the builders and stones required to construct Angkor Wat, which you can see in the background. 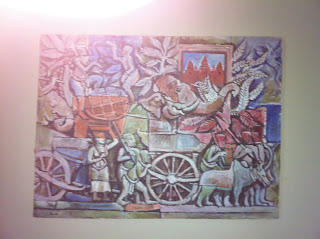 This one was a wedding present, painted by The Doctor's cousin, who is an artist. The birds are pecking at a Mulberry tree; she has one in her garden in London. 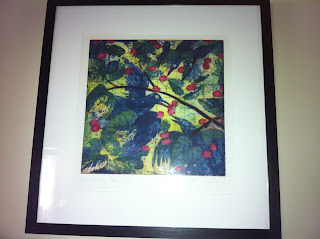 And so to Long Island. The Doctor bought this map for me as a Christmas present the first year we were here. Everyone always remarks on it when they come to the house (the one that made me laugh was the friend of Littleboy 1's who asked: "Is that England?") 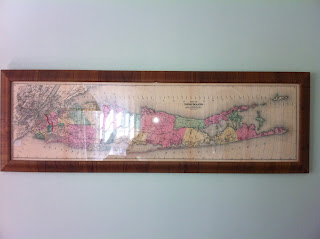 And here's our most recent acquisition, a wooden carving of a Cardinal that I bought last weekend at a local craft festival. These birds are always in our garden, so it will be a nice memento of our time here. 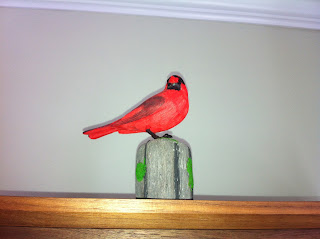 But where, you might ask, are the Littleboys represented here? Well, of course our house is filled with photos of them; but it would also not be complete without their own art. Here's just a selection of the many masterpieces that come home from school; I don't keep everything, but some of these will definitely be packed up into boxes for the trip back to London. 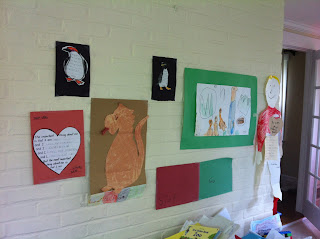 The end of the school year is looming, and June is blooming....chaotic.

There's a delicious blog post gone viral at the moment over here, by American blogger Jen Hatmaker, called Worst End of School Year Mom Ever. It's hilarious and I'm sure applies to UK mothers just as well as to US, although I know it isn't quite End of School Year time yet in the UK. But just you wait.

Jen's rant has struck a chord with so many people, because as the last couple of weeks approach, we're being bombarded with requests for teacher gifts, final projects, special end-of-year celebrations, invitations to art shows and the like. The number of pieces of paper that come home in the school folder is simply astounding (Jen calls it a "tsunami of doom" - a fantastic description). I'm lucky that I work at home and have time to go through their bags when they come home, but for working mothers who arrive home at 7pm it must truly be a nightmare.

In the last week I've been asked (at short notice) for the following:

Littleboy 1 to write/draw something about his teacher's forthcoming wedding, and me to go to a party in his classroom that the class moms are throwing as a "bridal shower", bringing plastic cups

That's not to mention remembering to get cards and gifts for both teachers, two piano teachers and the schoolbus driver....

At the same time the powers that be at my workplace have suddenly realised that I'm stopping in a month. Despite me asking them repeatedly for weeks what my role might be in London, it's taken them until now to think about it. The solution? Get me to do lots of extra work in the next few weeks so they might determine what that might be.

Oh, and it goes without saying that we're trying to prepare for the Big Move on top of all this.

How has June been for you so far?

*Are UK children asked to make dioramas? Or is this an American thing. Personally, I had never heard the word before moving here, but it might just be me. For those not in the know, it's a little scene, preferably contained in a shoebox, containing objects and things you've made, with captions.