I've always wanted to go to the Grand Canyon. However, as our trip approached, I was more than a little apprehensive. Someone had warned us that, once you arrive and look at the view, there "wasn't that much to do" there -- particularly with kids. I had also been told that the South Rim, where we were going, was far too touristy and it was much better to go to the less visited North Rim. Would it all be a huge disappointment?

But I am happy to report that it was all I expected, and more.

The South Rim is indeed the more touristy part of the Canyon -- the North Rim is much higher, and at this time of year can be closed due to snow. But maybe because we were slightly off-season,  I didn't find Grand Canyon Village at the South Rim too overwhelmingly ruined by other people. It reminded me rather of a ski resort, and was particularly quiet in the early morning and at night, when the day trippers had gone.

We stayed at Thunderbird Lodge - basically a motel, but perfectly OK -- right on the Canyon edge. For food you can eat at Bright Angel Lodge which is right next door and slightly more posh, but with a rustic edge; if you want to go very posh you can stay at El Tovar, which has a very fancy-looking restaurant. We ate our evening meals at the Arizona Room, a steakhouse with particularly delicious food -- it would have had a view over the Canyon, but it was too dark in October to see it even for an early supper; darkness fell at around 6pm.

The view is just incredible.  I could spend simply hours looking at it. The colours in the canyon keep changing throughout the day, and depending on the light and the weather. You can see why it's called "grand" -- I've been to canyons before, but the vastness and majesty of this one is incomparable. It makes you feel very small and very aware of the power of nature, as if you were standing on the moon or something.

So what do you do there? We went hiking into the canyon. We took the boys down the Bright Angel Trail to the three mile resthouse, then back up again. Down is pretty easy, up is obviously steep and much harder, but the path was well-made, the track easy to follow,

There are hundreds of signs warning you to take lots of water, food, etc and not to overdo it -- I think this must apply particularly in the summer, when temperatures can reach over 140 degrees, but in October it was a very pleasant temperature for walking, cool and crisp in the morning rising to t-shirt weather in the afternoon. We took a picnic, plus plenty of chocolate and snacks for the way up.

Our six mile walk was over by mid-afternoon, so there was time to do something else. We drove the 20 miles to the Desert View Watchtower, where you get a completely different view of the Canyon, this time including the Colorado River (which isn't visible at Grand Canyon Village). On the way back, we were lucky enough to see the full moon rising just at the time the sun set, which afforded the most glorious palette of colours. As we leapt out of the car to take photos, we weren't alone -- there were, as The Doctor put it, people almost "orgasmic" at the sight.

The next morning we were leaving, but got up early  and walked for a few miles along the Rim Trail before breakfast. This walk would be much more suitable for people with small children, or who aren't into proper hiking; it's paved, mostly flat and you can take a bus back to the village from various points along the way, so you don't have to worry about turning around. And you still get the incredible views.

So - would I recommend taking children to the Grand Canyon? Yes, definitely. What I would say is -- if  you want to walk, go at half term in October, and avoid the heat and the crowds. American schools aren't on holiday in October, either.

In fact we liked it so much, we are planning to go back when our boys are older. The plan next time is to hike all the way from rim to rim, a two day hike, and stay at the romantically-named Phantom Ranch lodge in the base of the canyon. For this, you have to book at least a year in advance. But I don't mind  that-- it's even more of an excuse to fantasise over future holidays.

How do you talk to your children about Paris? 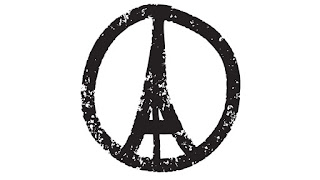 My older son was lying in bed with us on Saturday morning when we turned on the radio. We knew nothing about the events in Paris, having been driving down the M4 the night before and not watching any evening news. So when we heard the headlines we were naturally jolted awake, and he, who doesn't always listen to the news, was hearing it all avidly too.

He's 10 now, and he's been asking questions recently about Isis, as some of his friends are apparently talking about it at school following the Egyptian air disaster. Some of what he comes home with has been a little misinformed (eg Isis bombed the Twin Towers) but he understands the gist of it. And yet, he doesn't.

How do you explain to a primary school kid what motivates terrorists? And even more, how do you reassure them that they, and their loved ones, are not going to be affected? To tell them that "it couldn't happen here" feels disingenuous. We all know that it has happened in London, and surely will again.

I have told him now about the 2005 attacks, which happened just after he was born. He also knows about 9/11, having been recently to the Peace Garden in New York. But he still can't get his head round why people actually did these things. He's a gentle child, who dislikes seeing or hearing about any kind of violence (he doesn't even want to see the new James Bond film), so he does find it very upsetting.

A friend posted this article on Facebook, in which a psychologist explains that you need to reassure the child that they are safe. But I sometimes feel as if the more we talk about these things, the more it makes them feel unsafe. I'm trying to walk the line here between not hiding things from him, not making him feel that I'm world-weary on the subject and at the same time reassuring him.

I find it even harder to talk to his younger brother, 8, about it all. The questions come thicker than the answers with him, and it's harder with him to know what he's thinking afterwards. And I do want to make sure he's not secretly worrying.

How does anyone else cope?

I must have heard these words a thousand times from people in America before we went to visit Las Vegas as part of our holiday this half term. But what if you are the kind of grown-up who hates Disneyland, doesn't like gambling, prefers real scenery and the outdoors, and has two real kids in tow?

I hadn't planned on ever visiting Las Vegas, in fact, but it was the obvious jumping off point when visiting the Grand Canyon (of which more later). We flew from New York, where we'd been visiting our old town on Long Island and our friends, and decided to take in the sights of Las Vegas rather than just hiring a car and getting the hell out of town.

Once we'd planned this, I decided to embrace it, booking tickets to a couple of shows on the recommendation of a friend (Elton John's Million Dollar Piano and Cirque du Soleil's Beatles extravaganza "Love"). I also booked one of the few non-gaming hotels (the Mandarin Oriental) with a pool for relaxing during the day before we saw the shows in the evening. Other than that, I wasn't quite sure what we would be doing during the day with the boys. But there was plenty to explore.

The most amazing thing about seeing Las Vegas with kids is the themed hotel/casinos: in one morning, you can visit Venice, Paris and Luxor, not to mention New York, New York. As Littleboy 1 said in awe as we drove from the airport along the lit-up "Strip" where all the hotels and casinos are laid out in their neon glory, "This place is totally messed-up."

The Venetian is perhaps the nuttiest: with actual canals flowing through the shops in the hotel's basement, complete singing gondoliers, and an indoor replica of St Mark's Square with a fake sky that makes it feel like you are permanently at dusk (quite weird at 9am in the morning).


Of course, I'd rather be in the real Venice, but the fact they have done it at all is just rather surreal and amazing. Luxor has a gigantic pyramid as a lobby, and a huge sphinx outside; New York, New York has replicas of the Empire State and Chrysler buildings, Brooklyn Bridge and the Statue of Liberty, and Paris has a half-size Eiffel Tower. It is, (as Littleboy 2 put it), the "Capital of fakeness". 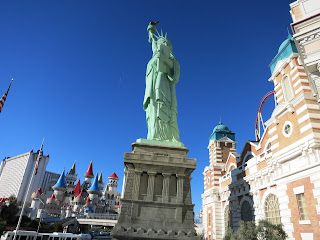 Another hotel / casino, The Mirage, boasts a volcano that "erupts" every evening on the hour, with fake lava and flames. This hotel is also home to the Secret Garden, a zoo that houses white tigers and dolphins (probably the highlight for Littleboy 2, a tiger fanatic). Next door, the Bellagio has an incredible, dazzling display of fountains, if you hadn't yet been entertained enough.

There is plenty to do, any kind of food you could possibly imagine eating and the shows themselves were spectacular -- my only caveat to taking kids being the jet lag (Las Vegas is eight hours behind the UK, three behind New York and the boys were simply too tired in the evening to really enjoy them properly). The weather in October is warm and fine, but not too hot, and our hotel pool was a delightful place to laze during the midday hours (mornings and evenings were chilly).

Would I go back to Las Vegas? Well, it was great fun. If you're in that part of the world, your kids will be amazed by the spectacle of it all, and they'll probably enjoy it.  But let's just say that as we drove out of the city towards the Hoover Dam and Arizona, I knew the perfect music to play from my iPod. I'll leave you with that.