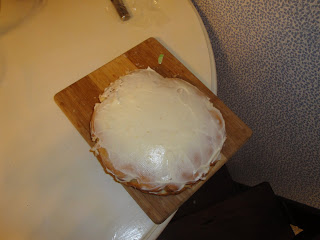 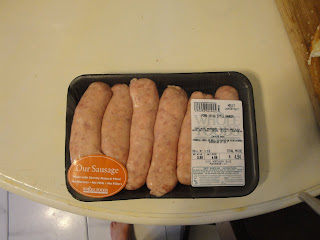 Recipe for Election Night...
1. Invite fellow Brit friend over for supper on Election Night and decide to have a traditional British meal.
2. Decide on bangers and mash. Husband fortuitously finds 'Irish bangers' at Whole Foods (pictured). Wonder if this will be enough to sustain us through the night.
3. Look in fridge and remember large bowl of uneaten frosting from cupcakes made for Littleboy1's birthday. Sniff it; still seems OK. Decide to make yellow layer cake from recipe book; Littleboys help by joyfully cracking eggs and sifting flour.
4. Realise have run out of vanilla so substitute lemon in recipe. Not being best baker in the world not sure what to do with parchment paper described in recipe. Put a big sheet under cake and around sides.
5. Bake cake. Comes out with rather weird uneven edges thanks to parchment paper crinkling up. Oh well. Put on a chopping board to cool. Rush outside to keep an eye on Littleboys who are picking up caterpillars and taking them round to show them to the neighbours.
6. Return an hour later after coffee at neighbour's house to find over-excited husband home early from work and glued to BBC World. He tells me cake has stuck to chopping board. However, not to worry. It can be saved from total oblivion by frosting.
7. Cake is finished just as first Exit Polls come in. Like them, it looks messy and lopsided.
8. Stop worrying about cake and pour margaritas, to be eaten with guacamole and tortilla chips. (Where the Mexican theme came in, I am not sure...). Littleboys rampaging around neighbours' garden at way past bedtime. We let them.
9. Friend arrives with Pimms (hurray!), Sticky Toffee Pudding in a tin, and custard. Cake is now superflous to requirements, but never mind. Sit outside enjoying Pimms and watching Paxman insult people on a laptop while The Doctor barbecues the bangers.
10. Finally wrestle Littleboys to bed. Proceed to gorge on far too much food and drink as we watch BBC Election Coverage deep into the night. Cake is served at 11pm, around the time Lembit Opik and Jacqui Smith lose their seats. Despite not being particularly beautiful (see picture) it tastes pretty good (but it might be all that Pimms.....)
11. Realise at half past midnight that there is no way we were are going to be up for the results, which are still as clear as mud. Friend reluctantly heads off to railway station for train back to Manhattan.
12. Go to bed at 1am, still listening on laptop. Last thing we hear before we switch off is headlines of the Today Programme, at 6am in Britain. Weird to think that we are going to sleep just as the UK wakes up. Results are STILL uneven and messy. A bit like my cake.
How was your Election Night?
Posted by nappy valley girl at 11:23

What a brilliant evening. Here in blighty, fell asleep watching the unfunny Channel 4 coverage, woke up, watched Paxman, fell asleep. Went to bed. Woke up none the wiser.

Bangers. Why do more countries not do them? They are food of the gods.

Obviously I tried to stay up and went to sleep on the sofa, woke up stiff and uncomfortable about 1.30am, watched a few results, went to bed, woke up a few hours later by small boy sticking fingers in my ears, turned on radio, VERY surprised to hear Oxford East still labour (was only 800 margin with Lib Dems), switched on Today as you were going to bed, didn't know much more. All as expected really!

Not surprising that we're both posting about the Election, but we must have had a subliminal conversation about the sausages yesterday.

Why didn't I think of that - bangers & mash is a total winner every time. I am super duper impressed with your cake - much as i love my cooking to the horror of many I have a complete aversion to anything sweet - I have no interest in cakes therefore make rubbish ones. The very fact that yours is in one piece, round and covered in icing - top work !

I am really enjoying discovering all these wonderful blogs - the best thing is that you get to nibble on these bite size chunks of brilliantness intermittently. Works great in my appallingly scheduled time poor world. Love your photos. Weird hungover feeling after the election...xx

Fab post. And now I get to see exactly what an Election cake is! I was reassured by your crinkly edged cake--that was me a couple of months ago with my attempt at a Nameless Cake. Thats when I discovered the joy (and ease) of cupcakes and saw my limits so I stuck with those.

Hope you enjoyed the Irish sausages! My favourite would have been the Pimms outside. I would have said 'hurray!' too.

You need a cooling rack. They are useful things.

Iota - Pah to cooling rack, just use the rack off the grill or the oven!

The election scares me, why of why can we not get it toegther.

Dumdad - Oh, I don't know, saucisson and frites is quite good too....

NB - what was the C4 coverage? Davina McCall?

PantswithNames - that sounds like a good effort to stay up, even if it was disappointing! I really thought we'd see the end, here - who knew?

Belgravia Wife - believe me, most of my previous cake efforts have been completely rubbish. I much prefer cooking savoury things too, but the boys enjoy the cake-making....

Michelloui - the Pimms was perfect. We didn't have any lemonade so used limeade - it works pretty well - and fresh spearmint from the garden. Mmm.

Iota - that is exactly what my husband told me - we actually do have a rack but I forgot about it. I am hopeless.

MadHouse - see above. Yes, election is quite worrying, who knows what will happen next.

The cake pictured just above the sausages looks kinda weird. Bu t you can always count me in on the Margaritas :)

I'm super impressed that you found proper sausages in the US at all.

To celebrate election day, we had:

Eton Mess with blueberry (blue for labour and a nod to Mr Cameron's past) - a rich, old favourite, but not particularly good for your health.

Met Mum - yes, come to think of it, the cake /sausage juxtaposition is a little gross!

mmmwe went to the British Store especially for sausages and had Bangors and mash on Saturday. I think Jeremey Paxman is an ass, he is so rude, ver irritating man!

I think your cake sounds lovely, I wish I'd seen a picture, mmm cake!

I stayed up far too late watching it only for nothing to have changed whilst I'd been asleep... not be fair very little has changed until this evening