The Gallery; a memory 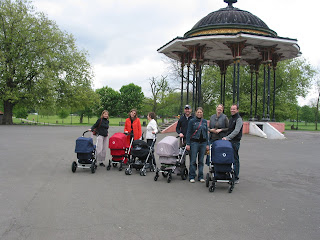 I'm posting this week's Gallery at Sticky Fingers entry today as tomorrow we fly to the UK for a couple of weeks. The Littleboys are very excited; and I will be too, once the plane journey is out of the way (I'm just hoping that the boys don't spend quite as much time in the loo on this journey as they did last time; for someone who is slightly phobic about plane loos, this is really not my idea of fun....).
Speaking of plane loos, yesterday we had a visit from a very good friend of mine from London, who revealed that one of the bargains she struck with her husband before having kids was that HE would take the children to the loo on planes. Amazingly, they have stuck to it (and that includes a trip to Australia and back). She chose wisely.
My friend was actually one of my original NCT group in Nappy Valley, and this week's picture is A Memory from that time. After we had all given birth, a handful of us met on Clapham Common by the bandstand with our prams and tiny babies. We had a coffee at the cafe and shared breastfeeding horror stories. I remember someone's husband remarking how much the babies looked alike; tiny sleeping faces wrapped up in white blankets and wearing tiny white hats.
Over the years our babies grew bigger and it became apparent that actually, they didn't look at all alike. All of us went on to have second (and some third) children; some people moved away or drifted apart from the rest. But a core group of us stuck together and my friend and I continued to meet up at Clapham Common, Wandsworth Common and other Nappy Valley hotspots on a regular basis until we left for the States last year.
A year later, she too has moved out of London and, partly thanks to yours truly, become friends with Susanna from A Modern Mother (see, my matchmaking skills are second to none). A nice link between blogging life and real life.
Yesterday, all four of our children played together on the beach. It's hard to believe it has been five years since that photograph was taken, but then again, so much has happened. And it reminds me that no matter what new friends I might make here, it's still so important not to lose touch with my old friends - even if those Nappy Valley days are long gone. Because shared history is important, and we mustn't let it slip away.

What a great memory. I may have crossed paths with you a few times as I often visited that bandstand.

I saw my old NCT group recently in Richmond Park - a 10 year reunion. It was lovely.

Have a really good trip. Hope there's not too many visits to that little room.

Have a good trip!

Sorry we won't catch up this time....have fun!

Have a wonderful holiday, and I hope you get some bandstand time. Might even see you there, with a tiny baby wearing a tiny white hat!

Very stange when offline and online merge. Say hi for me!!

This was such a lovely post. It makes me very appreciative of my NCT group in the Chiswick branch of nappy valley! We're at the point where some us are returning to work and some moving to the countryside or moving to another country. This memory will really help me savour the last couple of weeks when our group is still altogether and definitely inspire me to make sure our little ones remain pen pals...

Wow, look at that Bugaboo parade. :)
Good for you that you made some real friends at your NTC class. I am left with one, that's it.

Have a lovely time. I'm off back to Albania on Mon after 8 wks in the UK, so hope to get back to blogging & into our routine again. Sorry I've not been able to read & comment this summer much.

I hope you are having a fab hol in the UK NVG! Living abroad has made me really value keeping in contact with those near and dear to me. Even if we only talk now and again, we always do, and it's always worth it. Clearly you have some great friendships too that survive the distance!

Ah all set. It looks you all are just ready and pretty excited for the trip. Wish you safe and great trip. But keep Blogging :)