How do you know your kids are becoming American? 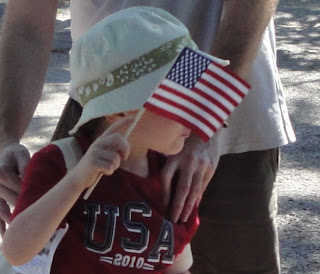 How do you know your kids are becoming American?

1. They use the expressions 'awesome', 'Oh, Man' and (more recently) 'Oh, brother' on a regular basis.
2. They can identify a quarter, and talk about dollars, but have no idea about pounds and pence.
3. They ask you who the first President of England was.
4. Some of their favourite foods are hot dogs, pizza and pretzels.
5. They know the entire pledge of allegiance to the U.S. flag off by heart, but can barely even recognize the Union Jack. 6. They are experts on the Statue of Liberty and the Empire State building, but couldn't point out Big Ben or Buckingham Palace.
7. Their artworks so far this school year include Lincoln's Log Cabin, George Washington's Cherry Tree, pictures of yellow school buses, and dissections of pumpkins.
8. They are already excited about the summer because of summer camp. 9. They think it's quite normal for their parents to take home the remainder of a restaurant meal in a box....
10. ....and it's also perfectly normal to go for a restaurant meal at an unusual time of day. Eg. Sunday lunch at 11am.
I'm beginning to think it's time they learnt a little bit about their home culture. I might even make them sit through the entire Royal Wedding next week. Mind you, on the strength of 9) and 10) I think we parents might need a crash course in being British, too......
Posted by nappy valley girl at 14:52

They are experts on the Statue of Liberty and the Empire State building, but couldn't point out Big Ben or Buckingham Palace.

That just proves they're little New Yorkers. A lot of people in this country thinks that New Yorkers aren't "really" Americans.

(And it's not just those people somewhere in one of those flat states either! I entered college in 2002, right after that rush of patriotism, and in my classes I met several people who explicitly said they didn't consider themselves Americans first, they were New Yorkers first. We're not as bad as Texas, though, where students have to take two years of Texas history, once in elementary and once in high school!)

@Conuly - and I do believe Texas is the only state that's allowed to fly its flag at the same height as the Stars and Stripes.

I don't know about that, but I do know it's the only state in the Union where more people own state flags than American flags! Heck, I'm a second generation New Yorker, and *I* had a Texas flag growing up, until my father took it to be buried in. (At least, I assume that's what happened to it, I haven't seen it since he died. Yes, he was from Texas.)

Do they call each other 'Dude'? Mine do (but they're older).

Conuly, Expat Mum - you're right, and even people from New York City are completely different from elsewhere in New York State. I once went to a conference in upstate New York and the Manhattanites scornfully dismissed it as 'the Midwest'.

Iota - that was another one I meant to include! They don't call each other dude (yet), but LB1 was drawing a picture of some stick men the other day and referred to them as 'my dudes'. We were in stitches.

You need to come back home for a while this year.

LOL! I only barely notice when my kiddos do/say stuff like that - but it must be truly gobsmacking to you, given the short time you've been here!

But do they love green bean casserole....? By then it is too late.

Ah yes but do they know all the names of the states yet?

I don't know what it's like out on Lawn Guyland, but over here in the city I've never once (well, only once) gone to somebody's house for Thanksgiving or Christmas or any other appropriate winter holiday and been given green bean casserole.

The one exception (and she actually made Turkish food, being Turkish by marriage and through a love of the country) was a friend who comes from St. Louis every year. (She cried the first time she heard that St. Louis is officially more dangerous than NYC.)

Mind, I've gone to people's houses on Thanksgiving where they made ziti and lasagna, and I've gone where everything was kosher (this being a Jewish house, that's no surprise), but green bean casserole? Never, ever.

Great. So we move to Russia, and by your reckoning, my boys have become American (on at least 4 of those points, anyway...)! x

Almost American - just give me a year, and I probably won't even notice any more....

Mud (+Conuly) - I seriously haven't come across it on Long Island. (And if I did, the boys would almost certainly hate it).

Muddling Along - they actually have a jigsaw of all the States, so it isn't that far off....

PM - at least they'll be well equipped if they ever move to the States!

And we're in Albania & my kids do about 4 of these too! Mainly food & language & sports, cos of tehir school & class mates. Loads of Americans here.....

Great list. My kids are so American now i can't remember what they were like as British. Within one week Harley had switched from Mummy what's for tea to Dude, Dude. We're currently in NZ to catch up on the "choice"

RTFM sent me over! Think I might hang out here for a while! Your kids probably now think good and polite service is normal too!!

The reverse is happneing to me, and I'm sure will be the case for LLC. Still, while we are in England I am keen for her to learn some bits of American culture. I have a friend here with an American mom and she is British through and through. If you have the benefit of getting to live in more than one country I'm in the belief of trying to soak up bits from both.

So many pluses. Not least the boys being able to recite entire scripts of Spongebob. Well worth staying out a few more years for that(?!).

I was just thinking that we need to visit London next summer and show the boys all the sights! They're getting seriously screwed up. One of them didn't know where Scotland was and I was horrified.

Glad we're not the only ones!

PLIT - I'll be interested to read about how they adjust to English life then!

About last weekend - asking what's for tea here gets you some very odd looks....

Kelloggsville - well we live in New York so it isn't always the case! But in general, yes, customer service here is pretty good.

Tanya - yes, I am actually really proud that they know all this American stuff. I hope it will stand them in good stead.

Angels -they are actually not allowed to watch Spongebob. (It's one of my pet dislikes, I don't know, there's just something about it that annoys me). But I just discovered a channel that has all the old cartoons (Yogi Bear, the Smurfs, the Flintstones etc) - so I'll educate them on 1970s Americana.

Lorna - I doubt my boys know of the existence of Scotland either. However, they know all about Ireland thanks to the OTT celebrations of St Patrick's Day....

I'm living in the reverse: my daughter called my son a cheeky, naughty monkey the other day. Not very Brooklyn of her. She also required a biscuit instead of a cookie and prefers chips to fries. Funny, I find it charming!