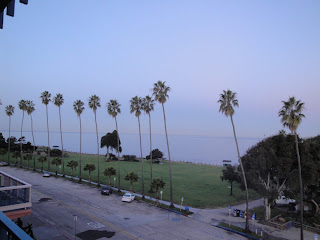 I'm on a West Coast high.

The Doctor was presenting work at a conference in San Diego, so we took the Littleboys out of school for a few days last week and whisked them away to California. It was Littleboy 2's fifth birthday at the same time, so we thought it would be fun to give them a bit of a break from the grind of school and treat him to a birthday at the San Diego Zoo. We visited a friend from University days we hadn't seen for 10 years, who lives there, and I caught up with the lovely Calif Lorna, who very kindly handed us tickets to Legoland California and joined us there with her two boys. The Littleboys had a blast and enjoyed everything, from seeing tigers and pandas to building and racing Lego cars, to the simple pleasures of being allowed to go in the hot tub at the hotel.

It's a long way from New York to California and although some things are the same, it feels in many ways like a completely different country. The landscape couldn't be more different: palm trees, cacti, scrubby hills and canyons, distant mountains. Certainly more like the Wild West than the East Coast, with its forests, autumn colours and windblown sand dunes. But it was the Pacific coastline I really fell in love with. Having driven from San Francisco to San Diego ten years ago, it was the real draw this time.

We stayed in La Jolla, north of San Diego, and woke up each morning to the sounds of seals barking. (They were actually pretty noisy - to the extent that Littleboy 2 complained that they were 'keeping him awake' - something we saw no sign of). Seals basked, flipped and dived in the little cove just outside our hotel, and up the road a huge colony lazed on the sand of another small beach, seal pups frolicking with their mothers while pelicans swooped around the rocks. When the breeze got up the huge Pacific rollers came in and the surfers came out in force.

I could definitely live in southern California. The Mediterranean/desert climate is definitely appealing - it never gets either really hot or really cold, and my friend tells me there are no mosquitoes, which is a real plus as far as I'm concerned. (Although there are rattlesnakes. And mountain lions. And earthquakes. So, not perfect).

But I think I might miss the seasons. Back on Long Island today, it was cold and frosty and crystal clear - a beautiful New York winter's morning. Plus, as far as going home in concerned, California is several thousand miles in the wrong direction.

Still, I'm dropping strong hints to The Doctor to suck up to the professors in San Diego. Not just yet. England beckons first, despite its scary Eurosceptic government, austerity cuts and all the rest of it. It'll be good to go home in 18 months, in spite of the craziness. But California - I'm hoping one day we'll be back.
Posted by nappy valley girl at 18:07

Ah, I can just see it now! We spent many family vacations in and around San Diego when we were living in Arizona. My boys loved Legoland, the Zoo, and the seals in La Jolla. We always took them swimming at the little eco-cove beach near the seal beach. Best memory was seeing the heads of my 2 boys out in the water and then noticing a 3rd head pop up behind them - not another little boy, but a curious seal! After my initial delight, I remembered that seals are shark food and had them come back in pretty quickly, but those 3 heads still stand out in my memory....sounds like you had a wonderful time.

From the dark of a Moscow morning (the sun isn't rising today until around 10.00am), that sounds just lovely...

Sounds like a wonderful trip! I have never been to California but I know enough bloggers and unmet friends out there, I could have a great time visiting them all!

We managed to tack a family week-end onto Husband's conference in San Diego our first November here. It was a real highlight. The kids remember so much about it.

I have a good friend who grew up in San Diego and now lives in New York suburbs. She is constantly agonising about whether to bring her kids up as East Coasters or go back to California and have them be West Coasters. I can see her dilemma. It's a huge choice.

How lovely to see Lorna!

Lovely. Did you see Pamela Anderson?

I've not done a proper West Coast road trip but with friends in Seattle to CA and this review the Pacific coastline is sounding very alluring! We could hack with a 2 and 0 year-old, right?!

Ms Caroline - our hotel balcony overlooked that cove! There were people swimming every morning, even in freezing temperatures.

PM - and back here in chilly NY, I'm remembering it as lovely too.

Suburban Princess - you should go!

Iota - I do think the 2 cultures are quite different. Maybe it;s harder for an East Coast American to move there than a Brit? And yes, was lovely seeing Lorna and meeting her boys.

NB - No, but there was some lifeguard action just outside our hotel! And I thought I saw Ben Affleck, although I later decided it wasn't him.

KM - there is a definite California look - it's more glam than Long Island, that's for sure!

Lovely! I love la jolla even though I usually just go for business trips and don't get to see the seals

How lovely to see Lorna!.

A Confused Take That Fan said...

Aah I love California too. Can't wait to go back. One of our good friends lives in LA. T-shirt weather every day...I would miss the seasons I think, but in January when every day is a grey day in the UK, I think not so much. Not long now 'til you're 'home'!!!