Picture Postcard from my Sunday run 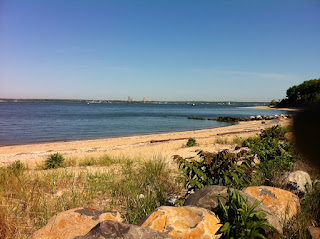 I recently (well, about six months ago) took up running, and to my surprise have become a huge enthusiast. I've gone from complete novice to someone who can easily run six miles and not feel stiff the next day; from someone who hated running to someone who actually looks forward to the next outing, and enjoys spends her hard-earned money at Dick's Sporting Goods on the latest running gear. I try to run three times a week for at least five miles; longer at the weekend. I'm doing a 10K race in Central Park in a couple of weeks' time, and I'm thinking a half marathon could be the next step.

The old me would have thought myself completely nuts, but the truth is that running is quite addictive. Once you break through the barrier of that first few miles, you get into your stride and into your 'zone' and it genuinely becomes easier. (I also feel fitter than I have ever done in my life, and am fitting into pre-pregnancy clothes I'd completely given up on - which is an incentive in itself).

But you know what also makes it easier? The environment in which you run.  I did enjoy my runs in England while I was over. Greenwich Park was beautiful, with its stunning views over London and its grand Wren architecture. Running in the West Berkshire countryside also had its moments (although I found the cars whizzing down country lanes at 60mph quite terrifying, and felt quite embarrassed running with my iPhone strapped to my arm as I passed farmers with tractors and sheepdogs - spot the New Yorker!).

Here on the North Shore of Long Island, the scenery is pretty good too. We live on a peninsula surrounded by water, and whether I'm gazing at the boats in the bay, the over-the-top mansions and gardens in the nearby millionaires' enclave or just the local duckpond, there's always something to admire. You get to see some wildlife too; I've spotted foxes, chipmunks and even a wild turkey (not to mention the Sunday morning cyclists showing off their calf muscles).

Anyway, last Sunday I did something unusual, and stopped for a water break half way through a seven mile run. It is getting hot here now, but that wasn't the only reason. I also stopped to take a photo on my phone of the view of Long Island Sound, above.

So, this is is my picture postcard. An empty stretch of scrubby beach, on a Sunday morning in springtime, and the view across the Sound to Westchester County with Connecticut in the distance. It's not the Maldives, but on a gorgeous, cloudless New York morning, nothing beats it. Wish you were here.

This post is for The Gallery - which has now reached its 100th post anniversary. Go Tara!
Posted by nappy valley girl at 17:48

Go Tara, and Go You!

Looks gorgeous - as, I'm sure, do you... *flops back onto sofa, exhausted by the effort of typing*

That's a beautiful view...how lucky, getting fit, keeping healthy and great scenery too!

That looks fantastic. very jealous of you. I used to run, years ago and really loved it. My last run was when I was pregnant with the eldest boy. I'd like to get back into it. I think I should take inspiration from you!

I miss running (since my injury) more than anything. Happy you have found the bug :) lovely picture.

Just found your blog through Sticky Fingers... lucky you being in the USA. My husband is an American but we have settled in the UK for now because of my children. We would so love to be in the USA though... luck you.

Nicely done.
Glad you enjoy your Sunday Run.
I've never found running to be much fun.
Your post card is a nice addition♫♪

I just completed my first half marathon a month ago, having taken up running 6 months ago to combat migraines. It was an amazing experience. I completely agree that where you run makes a huge difference. I'm lucky enough to have been transplanted from the North of England to Santa Barbara and I always try and run by the ocean when I can. I even ran past John Cleese the other day - I think we're both thankful I was too out of breath to say hello!!!