A week in the White Mountains

As we entered New Hampshire for the first time, I noticed something. Although only just over the border of the Connecticut River, it seemed very different from Vermont. Much more low key, more "country" somehow, although equally rural. Vermont is chocolate box rural New England, with tonnes of farm stands, country stores selling delicious cured ham and maple syrup, idyllic looking log-cabin homes. In northern New Hampshire you seemed more likely to find a ramshackle general store selling tins of food (and the odd pitcher of maple syrup), with a sign telling you where to register your deer. 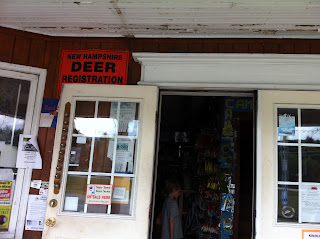 
There were signs of run-downness - boarded up holiday cabin parks, which had once obviously been pristine, lined the highway. Clearly, although popular for ski-ing, northern New Hampshire isn't so much of a summer holiday destination as Vermont, which everyone loves. But that doesn't mean that it doesn't have anything to offer.

There was so much to do: for a start, the White Mountains contain literally hundreds of beautiful hiking trails, many leading to gorgeous waterfalls and lakes. We bought an excellent book: Best Hikes with Children in Vermont, New Hampshire and Maine which told us where we could realistically hike with the boys, detailing the terrain, things to look out for and even games to play on the way. The Littleboys surpassed themselves, doing a demanding five mile hike one day (note to self/The Doctor: even though you yourself can run five miles in under an hour, climbing up slippery boulders and fording streams for five miles with small kids actually takes about four hours) and not even complaining. 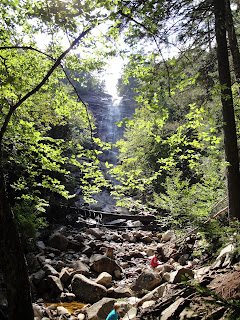 We hiked to the beautiful Arethusa Falls with the boys.


If you like mountaintop views, the White Mountains are also excellent. There are many ski resorts where you can take chairlifts, cable cars and gondolas up to the top, even in summer, and admire the views. You can also take the Mount Washington Cog Railway to the top of the Northeast's highest mountain, which famously boasts the highest windspeed ever recorded (and man, was it windy up there). Combining trains and mountains is a sure-fire hit for small boys. 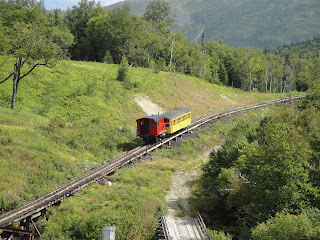 What else? You can visit gorges, swim in lakes, canoe or kayak, or (and this is the part the boys loved most) visit a waterpark for the day. While I wouldn't say there are hundreds of great restaurants, we managed to identify a couple, and visited them both twice - they were incredibly child-friendly as well as offering delicious food. Fabyans Station, near the Cog Railway, even has a model railway which goes round the walls of this former station building, while Rosa Flamingo's in Bethlehem had excellent food for both adults and children - and most importantly, crayons.

We stayed in a cabin on a KOA campsite - a good option for those who don't have a tent (or in my case, don't enjoy sleeping in one much). You get a bathroom and a proper bed, but there's no kitchen so you still cook outside. Inside, it's fairly cosy (two small boys rampaging can get a bit much on a rainy morning) but in the end we didn't spend much time there; even at the campsite, we were usually outside or at the pool. All meals were outdoors (the boys loved having breakfast al fresco) and surprisingly fearless chipmunks often appeared to eat up our crumbs. We spent one particularly memorable evening playing a family game of Junior Monopoly outside in the darkness, lit only by a camping lamp. And luckily, the mosquitoes, the bane of our life in Long Island, were virtually non-existent. 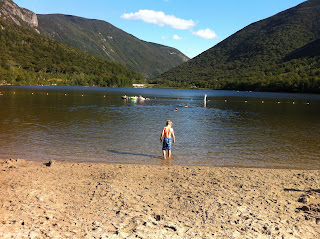 The holiday nearly ended before it had started on day one, when Littleboy 2 managed to fall backwards and put his hand on the metal casing of the campfire pit (despite numerous warnings to stay away from the fire). This necessitated a trip to the local ER, and a lot of panic, but to be honest I thought it was going to be much worse than it turned out to be - the burn didn't hurt him after the first night, and it healed so quickly that he was swimming again by Day 4. When quizzed, he says that losing his toy turtle in a waterfall a few days later was "much worser" than the burn incident. However, I will be even more vigilant now about children and fires - even if you think they know not to go near it, give them a torch and a Scooby Doo game to play and all common sense goes out the window.

All in all, it was a successful trip and I'd recommend New Hampshire to any family looking for outdoorsy fun in a beautiful region of the US. You could get there easily from London (fly to Boston and it's a few hours away). And if you fancy having a look at maple-sweet Vermont too, it's just a quick trip over the border.
Posted by nappy valley girl at 17:58

It sounds idyllic - have always loved NH and have fond memories of skiing with my dad in the White Mountains in the winter and trips to Lake Winnepesaukee in the summer. Glad LB2's injury didn't prevent you from having a lovely time! That sort of thing does seem to be standard with boys, doesn't it?

Never a dull moment, eh? Glad LB2 was alright and you got to enjoy your holiday. I love outdoorsy adventure like this and look forward to when ours are old enough to be able to hike and do long walks.

It sounds really wonderful! So glad it didn't come to a premature end - it also sounds like the boys are really growing up! Had trouble getting mine to walk a 20-min trail in Minnesota - son1 was scared of the woods! (there was also a thunder storm coming which didn't help). They've got way too used to being surrounded by open desert! But I know they'd love that mountain train!

It sounds like you had a great time, love the photos

Wow, what beautiful views. I found lake swimming far less worrying than letting my little ones (now in their 20s/30s) swim in the sea. We used to go to beautiful campsite in Switzerland which had mountains surrounding a huge lake (water was a tad glacial though).

sounds lovely. I didn't spent much time in New HAmpshire (got engaged in Vermont though!) . Now I wish i had

It looks like the perfect place for a break away from it all, glad the burn wasn't too bad - it could have been worser! My great uncle lived in Vermont for years and I've seen many photos but never visited.