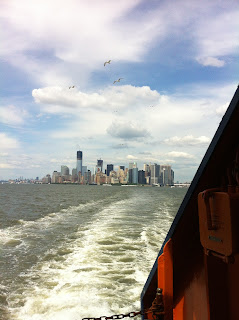 On a trip to Manhattan this weekend, we made a quick detour on our way to Battery Park, where we were meeting my brother in law and family who have been staying. We walked down past the World Trade Center site and looked at the new One World Trade Center tower which has suddenly (it seems) sprung up and is now swiftly coming to dominate the lower Manhattan skyline. (You can see it on the left of the photo above, taken later that day from the Staten Island Ferry).

Although we didn't have time to go in to the September 11th Memorial Plaza on this occasion, we stood far below the new tower and gazed up. It seemed hard to believe, on a quiet summer afternoon, that just over ten years ago this was a place that exploded into horror; that people all around these streets would have been running, escaping as the towers collapsed.

I had been wondering how to explain why we were there to the boys. I've heard people around here say that they haven't taken their kids to Ground Zero and don't know how to tell them about it - but in my experience of these things, children can take often information like this in their stride. In the end I decided just to tell them straight what happened; I said some bad people flew planes into the previous buildings deliberately, and they fell down, and now they were building a new one. As I predicted, while they obviously found it confusing news, they didn't seem too upset or traumatised - I expect that, to them, it sounded a bit like a storyline out of Spider Man or Batman.  (But they knew it was  a sombre subject. Later, I heard Littleboy 1 talking to one of his cousins very solemnly about the 'twin brothers', as he called the twin towers. He'd obviously taken it all in).

I told the boys that they might hear people at school mention "9/11", and if they did, then this was what they were referring to - but the boys said they hadn't ever heard of it. In truth, nearly everyone we know here was affected by it. Many of our local friends lived in the city at the time, or worked downtown near the World Trade Center. But it was so traumatic an event that it is barely mentioned by New Yorkers. And when it is, most people just shudder and quickly change the subject. It's not one of those 'where were you when JFK was shot/Diana died' conversations. It's too close to home.

Nevertheless, the fact that a new tower is now rising from the ashes of Ground Zero shows that New York is moving on. The terrible events of September 11,2001 will clearly not be forgotten in our lifetime. But this city is resilient, and pretty soon the new skyline may become as iconic as the old one.
Posted by nappy valley girl at 15:06

it does seem to have sprung up to me too. I found it really beautiful when I was last there. Ten years ago I remember being in a black cab in London going to pick up the kids from their nursery school opposite Hyde Park and the driver said: "There seems to have a plane crash"...actually that did seem a million years ago

My youngest wasn't around for the original 9/11 and seems to know quite a lot about it. He isn't traumatized about it, but then it would be hard to describe just how terrible that morning was to anyone who wasn't there.

It's talked about more openly here. I don't think I'd fully realised, living in the UK, just how very seminal a moment it was. It's like 1066, for Brits. A date that everyone will know, embedded in people's minds, a moment of national history. Like Pearl Harbor.

Interesting that people avoid the subject. I guess over here we're more used to the trauma of terrorism, albeit on a smaller scale and nothing that changed the course of history

Even with all the crazy things that happen in the world things always smart that extra bit when they hit close to home. When I'd just moved to the UK and was paragliding in Switzerland the tandem gliding instructor started chatting to me about 9/11 when he learned I was from NY. It's not my conversation of choice at the best of times as you note so I definitely wasn't keen for that discussion in that otherwise serene moment.

It makes sense to want to move on and not talk about it forever and always, especially if something happened so close to home. On the other hand, I would have assumed that at least through memorial days, kids would have known and that it would have been more of a topic at school.

I think you're right to talk to your children about it, it's an event that needs never to be forgotten. I remember bringing my nephews home from a birthday treat to see it unfold on the tv as we returned.

I still remember very clearly getting my boys ready for school (we were in Arizona, several hours away from East Coast time)when a neighbor called to tell me to turn on the TV. We spent the rest of the day in a state of shock, especially since both of our mothers were in Virginia(right outside of DC) at the time and my mother-in-law works at the Capitol, which was evacuated for hours, since one of the planes was supposedly heading in that direction. We couldn't get through on a phone line for hours. A friend of ours was in the Pentagon when the plane hit there, as well. We lived near one of the flight paths into Sky Harbor Airport in Phoenix and what I remember most is the incredible silence that day - clear skies and not a sound...

ALW - yes, it seems a long time. I was in Sicily, trying to work out what was going on from Italian TV.

Expat Mum - maybe they talk to kids more about it as they get older? Certainly no mention in Kindergarten or first grade...

Iota - it is definitely a date embedded in their national consciousness.

NB - yes, we were so much more used to it in the UK. It was a massive shock for Americans.

Tanya - it's definitely not something I'd ever ask people about here, unless they volunteered the information.

MetMum - it's funny, they have lots of memorial/veterans days here but 9/11 is not really mentioned in the school setting. I am sure that will change though.

Ms Caroline - that must have been very scary, knowing people who were there. I don't think I knew anyone who was in the US at the time, although one friend had been working in the World Trade Center only a few weeks before.