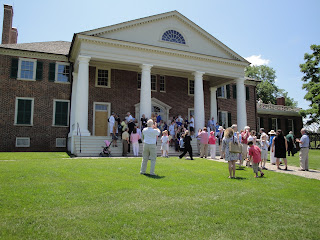 Our family might seem as British as they come, but it is a little-known fact that my husband has American roots. His grandmother was from a Virginian family, but grew up in Japan and eventually married an Englishman. She, however, had many brothers and sisters who remained in Virginia and so he has a whole cohort of second and third cousins down there.


It also turns out that the Virginia family was related to James Madison, the fourth president of the USA. And this weekend, a group of Madison Family descendants got together at Madison's Virginia estate, Montpelier, for a reunion.

A few weeks ago we received an invitation via email, and decided to go. It's a long journey just for the weekend, but it sounded too fascinating to miss. Besides, the Doctor and I love Virginia. We first went there on holiday when we were still students, and met his family; we took the boys there when we first arrived in the States. His relatives mostly live in a relatively small area, between the college town of Charlottesville and the Blue Ridge Mountains; the scenery is stunning, and the welcome is always friendly.

So on Saturday morning, (after a manic drive that involved roaring through rural Virginia due to closed roads and traffic jams), we arrived at Montpelier just in time for the 'family photograph' on the steps of the grand Southern mansion. There were people there from far and wide; Virginia, further South, the Northeast and even New Orleans. Elderly ladies with charming Southern accents; kids running around. Apart from the relatives we'd met before, we didn't know any of them, yet it was strange to think that they were all somehow related to The Doctor and also to the Littleboys. There was also a distinct family resemblance between some of the men; one distant cousin came up to The Doctor and said she knew it must be him, because 'you look like everyone else'.

The weekend continued with lunch, tours of the house (which is now open to the public, and styled in the way Madison might have lived in it) and gardens, and a lecture on Madison by a man who had written a book on him (which I had to miss because there was no way the boys would sit through it); The Doctor went, and learned more about his illustrious ancestor, who was integral to the writing of the US Constitution. The evening consisted of cocktails on the lawn before a delicious Southern-style dinner (while the boys got babysitting, pizza and a movie - perfect). We spent the night with some of The Doctor's cousins, before returning to Montpelier the next day for a final lunch.

It was odd, but interesting, to be at a family reunion at which most people were strangers. The boys had a great time, but I don't think they quite understood why we were there (although I bought them a children's book about Madison from the gift store to try and put it in context). I wonder what Madison would have thought of all these people gathering at his home, nearly two centuries on?

This post is for The Gallery at Sticky Fingers; topic, family.

What an interesting family reunion! You can't get much more American than James Madison. What a neat experience for all of you.

thats fascinating. I wouldn't have turned down an invitation like that - fantastic. what a great family history.
I once went to a clan meeting (my Dads family has scottish roots) I expected some connection... alas it was all a bit disappointing, but the buffet was nice. Cocktails on the lawn sounds much better.

What a fabulous connection and opportunity. I do find family history interesting. One side of my family is small and blond and blue eyed, the other is taller and darker with grey eyes. I definitely take after the later. It is fascinating to think of all the traits we consider integrally ours, that may well come from a great-great-great someone or other.

What a fascinating thing to do. I love big family gatherings when you suddenly see family resemblences in people who are essentially complete strangers.

What fun! And I love that part of the country - Charlottesville, Middleburg, out to the Blue Ridge. I'm not a Virginian (half Bostonian, half Canadian) but lived in Viriginia several times during my life (met my DH there, even, when we lived in Williamsburg!) when my family were living in the US between foreign postings, and went to University in VA as well, so it always seems a little bit like 'home' to me. The reunion sounds fascinating, and it must have been so interesting to meet all those distant relations. Did you stop by the campus of JMU as well?So nice to have a university named after an ancestor...maybe the boys can get a stipend for being related....; )

This really makes me want to go to Virginia, it looks so green and lush and elegant. Think all our ancestors were pretty ordinary, how cool to find out his ancestor helped write the constitution. And what a fabulous Mansion!

Jenny - yes, ironic that we're probably got deeper American roots than many of our neighbors!

helloitsgemma - yes, it was definitely civilised if nothing else and as you say, too good an invitation to miss.

Mud - it's quite bizarre really. In fact, it does my head in to think about it too much but it is fascinating.

Pants - there is a definite 'look' that some of the men have that runs very deep - it's strange.

Ms Caroline - did you go to UVA? I've looked around there a couple of times. Didn't know about Madison U though - must find out.

ALW - it is definitely worth a visit; a beautiful state and plenty to do.

Have the boys grasped the gravity of their illustrious ancestor yet? It is a good story to tell in school!

What a great experience!