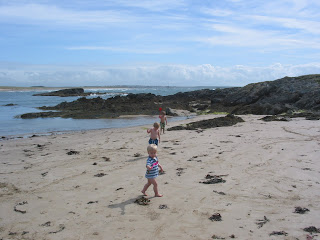 The theme of this week's Gallery was Holidays and left me wondering what to choose. I have travelled a lot and have literally hundreds of holiday pictures, of all kinds of wonderful places, people and things. How could I possibly pick just one?
So I have posted a picture of the place where we will be going on holiday this August. Anglesey. It may not be the most glamorous holiday destination. It may seem perverse that we are leaving a warm, sunny, seaside town in the US to go to another beach on a colder, frequently rainy seashore in North Wales. But this is the place where we most frequently go on holiday.
The Doctor has relatives who own a house there, and have done for over 50 years. Every summer there is a house party with cousins and friends; there is swimming, sailing, huge meals, fireside chats late at night, high jinks running around the house. The Doctor's mother played on these sands as a child; he himself has been there almost every summer of his life. I started going with him aged 20, and was immediately struck by the magic of the place (despite the fact that the sea was the coldest I had ever swum in). I'll always remember the time we drove up late on a Friday night from London after work and swam at midnight in sea during a heatwave. It was here that, in August 2004, I had the first inkling that I might be pregnant.
We took Littleboy1 there as a six week old baby; he screwed up his eyes against the light on the beach and wailed. A year later, and we were back again, me pregnant again and he loving the beach. Then we went twice with both boys; the picture above was taken in 2008, with their cousin.
So it is to here that we will return for the August bank holiday on our trip to the UK. There will be cousins. There will be sandcastles. There will be beach house lunches. And whether it rains or shines, it will add to our collection of Anglesey memories.
Posted by nappy valley girl at 13:30

What a beautiful picture! I've never been to Anglesey, but one of the things I've most enjoyed about this week's gallery is seeing how amazing some of the UK is. Thank you for this one too!

lovely picture and great memories. Have visited Anglesea many times & love it too.

We will be there a little earlier in the month than you - do you have any recommendations for good pubs to have lunch at? (My goal - take the kids to see Beaumaris and Caernarfon - DH's goal - a good pub lunch!)

That sounds wonderful, how lucky you are to become part of such a lovely tradition.

Have a fantastic time!

This is such a lovely post. Having a family holiday spot is the best. The memories are what make it so special. Hope you have a lovely time as always.

Make sure you have plenty of wine in the picnic hamper as well. I always build my finest sandcastles with a glass of Pinot Grigio in one hand. Enjoy your holiday!

Planb - yes, the UK is amazing. And when the weather's good, it really can be perfect there.

Almost American - what a coincidence! Beaumaris is lovely. you must go to the castle. As for pubs the only one I really know is the White Eagle in Rhoscolyn, near Holyhead. But that's pretty nice.

CalifLorna - yes, I feel very privileged to be part of it.

Nmaha - Being with family is definitely the key.

1950s housewife - rest assured, there have been plenty of glasses of wine on that beach!

Worth adding, perhaps, that the Doctor went there when he was even younger than the Littleboys were - only 3 weeks old. It was the first week in August.

And if you should pass London, please give me a shout and let's meet for a tea. Or pimms & lemonade.

I love family traditions like this. Have fun and enjoy the weather (I've heard this is the HOT one). Will need to wait six years for the next one though.

Lovely photo. Have been to Anglesey several times, your holidays there sound wonderful! Hope the weather holds out for your trip this time round. Great to find your blog, will be following you, Helen x

Met Mum - At the moment the plan is not to go to London. But that might change if our tenants continue to misbehave....

A Modern Mother - do you know, I've only ever had about two 'bad' ie rainy years there. Anglesey often seems sunny when the rest of the country is wet - and vice versa.

Blissful Mum - thanks for visiting, and here's hoping...