The Gallery. The power of Nature... 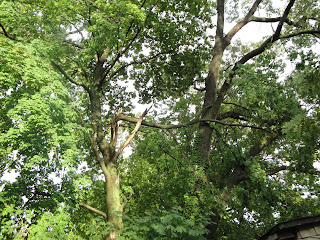 Driving back from our weekend away, it started to rain. The traffic north of New York City and across the Bronx was appalling - but then, it often is, so we didn't think anything of it and took an alternative route.
As we crossed onto Long Island and got nearer and nearer to home, we noticed quite a few tree branches on the roadside. There had obviously been a strong wind - but again, there often is with thunderstorms at this time of year.
Then, as we drove up the road that leads to our town, we started to come upon a scene of complete devastation. Trees were uprooted; lampposts knocked over; roads were closed off; power lines were down. There were police cars everywhere, and people wandering around looking astounded. Whatever had happened, we had only just missed it.
This picture shows one of the huge trees at the back of our house, a massive branch completely snapped off. One of our neighbours had a huge tree break in half; all over our road, there were branches and logs.
Neighbours reported that the sky had turned completely black and had been followed by an intense storm that lasted a matter of minutes.
Yesterday, I read that the storm had crossed the Bronx, where it was officially classed as a tornado, before tearing across Long Island. The traffic jams in the Bronx were due to its chaotic aftermath - and, if we'd been a bit quicker leaving lunch, we would quite likely have been caught driving in the eye of the storm. A sobering thought. Never underestimate the power of Nature.
This post is for The Gallery; topic, Nature. (Sponsored by Green & Black's; yum.)

Gawd, terrifying. We just don't get stuff like that in the UK do we? well apart from that whole 1988 storm thingy but that was Michael Fish's fault as we all know.

We moan about the grey and the rain, but at least we don't have random acts of violence like this.

Something's up with your WV - I just got "preggoge" - also quite apt.

Wow, close call. It is a sobering thought that you could have been caught up with it but that's fate, I guess.

I had a similar experience in Canada when I was 11. We were camping, and the tents lifted several feet in the air like they were balloons, and dumped in the woods. The entire surface of the lake was lifted, and boats dumped like toys onto the shore. Surreal! Glad to hear you escaped the worst of it.

i once met an arboriculturist from new york: i met him in a camp in tanzania's wild, wild west. i wonder if that's what you need now: a tree surgeon? can give you his contact if you need it :) x

The flight after The Cat's Mum and The Cat were on was diverted...to toronto! Nature sure is a powerful thing...

Spudballoo - ooh yes, that '87 hurricane was definitely the most frightened I've ever been of weather in the UK. But yes, in the US the extreme weather events are much more frequent.....

Mwa - here's hoping you won't be preggoge for too much longer!

kateab - it really is, and I guess someone somewhere has to be caught in it....

Jen - it truly is terrifying that such things can happen.

Reluctant Memsahib - thank you! The tree in question officially belongs to the neighbours, though it hangs over our garden, and I think they are getting the tree man in. There are lots of tree surgeons around here - and I think they do a roaring trade....

I read the title and was so sure to find a picture of your boys :)