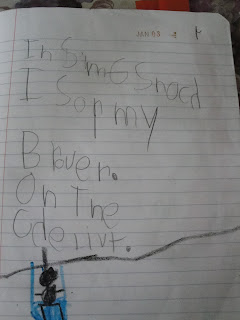 School came to an end last week - a rather sudden and abbreviated end, thanks to a freak two day heatwave, that meant they were sent home early on the penultimate day. (Only the final day, they attend only for an hour, then come home, due to some strange New York State rule that only serves to infuriate all working parents). For the last few days, the boys came home laden with all manner of artworks, notebooks and creations from throughout the school year. Pieces of pottery; a papier-mache elephant; lots of drawings of Angry Birds (the teacher must think I do nothing but let them play iPad games).

But most interesting of all to me were their daily composition journals. These were not only very revealing in terms of what they chose to write about (who knew that having hot dogs would be more memorable than whale watching?) but also showed just how much their writing, spelling and general ability to express themselves has improved over the year. Littleboy 1's writing in particular has become much neater, although much of his spelling still flummoxes me (and makes me laugh - 'Virginia' rendered as 'Bug-inya' was a particular favourite).

Littleboy 2's spelling is still very phonetic and often puzzling, not helped by the fact that sometimes letters are back to front. But, bizarrely, the boys seem to have an intuitive grasp of each other's spelling. Take Littleboy 2's picture/essay, above. Any idea? I could work out that it included the words 'brother' 'on' and 'the', but was otherwise none the wiser. As I was looking at the book with him, Littleboy 1 marched over and took a look. Bear in mind it had just come home from school, so he had never seen it before. He translated effortlessly: 'In Smugglers' Notch, I saw my brother on the chairlift'. (Once you've got that, the picture also makes sense. Smugglers' Notch is the ski resort we went to at Christmas).

Absolutely lovely xx and ps, I can't believe school finishes in the US even earlier than here. We're into the crazy last week and thank goodness they don't close schools here due to temperature!

I got "In smenotch I saw my brother on the chair lift"; but then I do teach 4 and 5 year olds and so read stuff like this every day. Great phonetical writing.

The mum of all trades said...

So cute! I could puzzle out some of it, so I haven't lost my skills completely! I still remember when my boys were learning to write - Son#1 wrote nearly everything in reverse order for a while and I was so worried that he had something seriously wrong with him(first child, you know...) Fortunately, he sorted himself out quickly, and when Son#2 began doing the same thing, I knew it was just part of the process. Of course, the fact that both of them are left-handed doesn't help at all...

How funny that they understand each other like that...

'Brover' really made me smile. Are you trying to instil a bit of a little Britain accent? Little L came home the other day, and when I asked her what they did at nursery, she said 'Nuffing.' :-)

Love love love the brother on the chairlift and Buginya, a spelling which I'm sure the state itself would love to adopt (and it is full of bugs isn't it?) I'm not a keeper but I do keep all these wee bring-home-things, even the broken pottery.

Kid writing is great and definitely worth saving. My mom still has a poem on the fridge from my sis reading "Roses are red, viles are blow and I love yow." And great that the boys are on the same "wavelength." Also I always enjoy reading about their journey through the US schools as it strikes close to home for me :)